See how Broomberg capitalized on quality content and the smart use of popups to dramatically increase the number of leads their blog brings in.

A 72% increase in leads from the blog, thanks to popups

Is there anything more refreshing than the smell of a freshly cleaned home? (Or office?) For those of us who don’t have the time or energy to do it ourselves, we turn to businesses like Broomberg.

Based in New Delhi, Broomberg faces some stiff competition. Not only do they clean their clients’ homes, they also offer other home services like painting and restoration. More services, more competitors. Thankfully, they found a way to gain an edge by focusing on their online marketing.

Using popups, Broomberg was able to get more leads without spending more money on paid search advertising (aka. pay-per-click, aka. PPC). But it involved more work and strategy than just adding a popup onto a page on their website. Here’s how they did it.

PPC is expensive. When you have so many competitors chasing bottom-of-funnel keywords (usually specific and purchase-related, because you’re going after people who are at the “bottom of the funnel” and ready to buy), it’s inevitable that the cost per click—and cost of acquisition—will go up.

Being a rather farsighted and budget-conscious marketing team, Broomberg’s Ashutosh and Sugandha wanted to identify non-paid channels to get more leads for their painting and floor restoration services.

Let’s look at how they created blog content that targeted top-of-funnel keywords and ranked these posts on Google to drive relevant traffic.

Broomberg takes keyword research seriously. Instead of seeing keywords as strictly SEO or PPC plays, they look at them as a way of finding out the problems that prospective customers face.

Home painting and floor restoration are big-ticket services and hence have a longer sales cycle. Consumers generally conduct extensive online research before looking for vendors for these services.

A go-to for learning about painting and floor restoration

Broomberg had two main challenges. Their competitors were well-known billion-dollar paint brands that also offer painting services, so they needed to move beyond PPC. And for flooring topics, there were good “how to” keywords, but they were hard to target as their competitors included well-known how-to blogs like Wikihow.

This meant that Broomberg’s content had to be really good to rank—but they were up to the challenge.

The emphasis is on quality and not quantity. There is no point making sub-standard content and adding to the clutter on the internet.

Fun fact:
Broomberg has been running an internship program since 2015: they hire talented students/working professionals on sabbatical, teach them the basics of digital marketing, and guide them in creating awesome content for the blog. Win-win.

What Broomberg discovered was that once you have your basic on-page elements taken care of, ranking is a question of how hard you’re trying to help your target audience.

For us, the secret to ranking on Google is a genuine desire to help the reader and solve their problems.

Over the next year, Bloomberg created a total of 13 blogs targeting top-of-funnel keywords for painting and floor restoration.

Between October and December 2017, blog posts about painting pulled 41% of the traffic that PPC brought in for those topics!

The next challenge was how to convert this free traffic into leads, meetings, and ultimately revenue.

Broomberg attracted customers by offering them a free site inspection and quotation, which was especially attractive for floor restoration customers as they needed someone to inspect the condition of their stone floors and suggest remedies. Here’s an example of a form they added into a blog post: 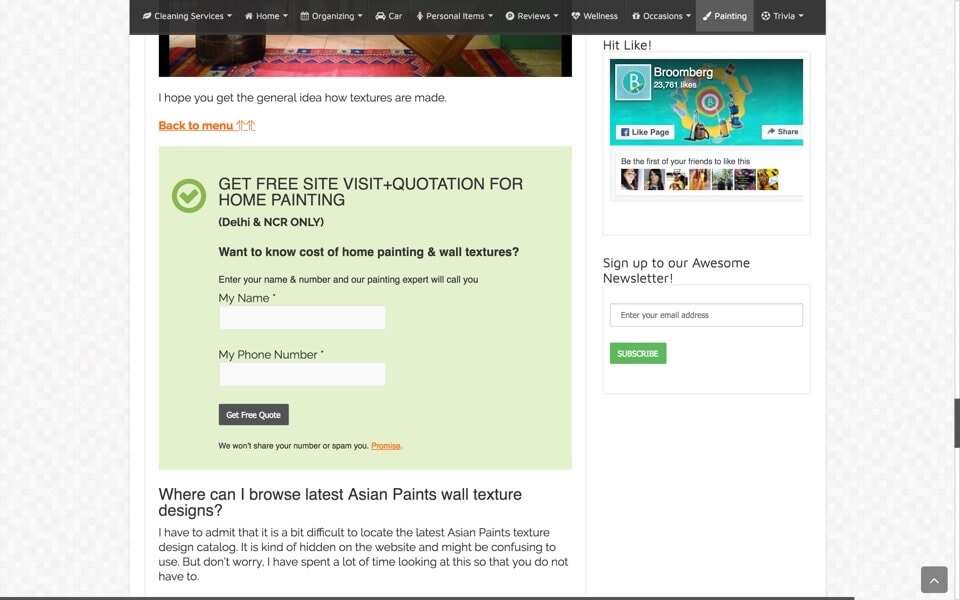 Ashutosh and Sugandha noticed that these forms, embedded within the blog content, didn’t capture too many leads. It may have been because they weren’t that noticeable in the text.

From watching user recordings on Hotjar, they also found that most customers were more interested in reading the blog: average time on page for a blog post on painting was 1.5 minutes. Readers may have forgotten to enter their details as they were so focused on reading the post itself.

Moving the forms around on the page didn’t do much either. What to do?

An offer you can’t refuse

Initially, Ashutosh and Sugandha were a bit reluctant to use popups on landing pages (they were going to use them on exit) because they thought that it would annoy visitors.

Then they thought about using it on blog posts.

What we did not know was how much the popups would contribute to increase in relevant leads for these services.”

To encourage visitors to convert, Broomberg decided to use popups that offered free consultations and quotes.

To increase emotional appeal and add a personal touch, they used a picture of salesperson Amit, who would conduct the site visit.

Giving a name and a face to a sales team member made the offer seem more human and would hopefully result in more leads.

This is what a popup created by Sugandha (with a template!) looked like: 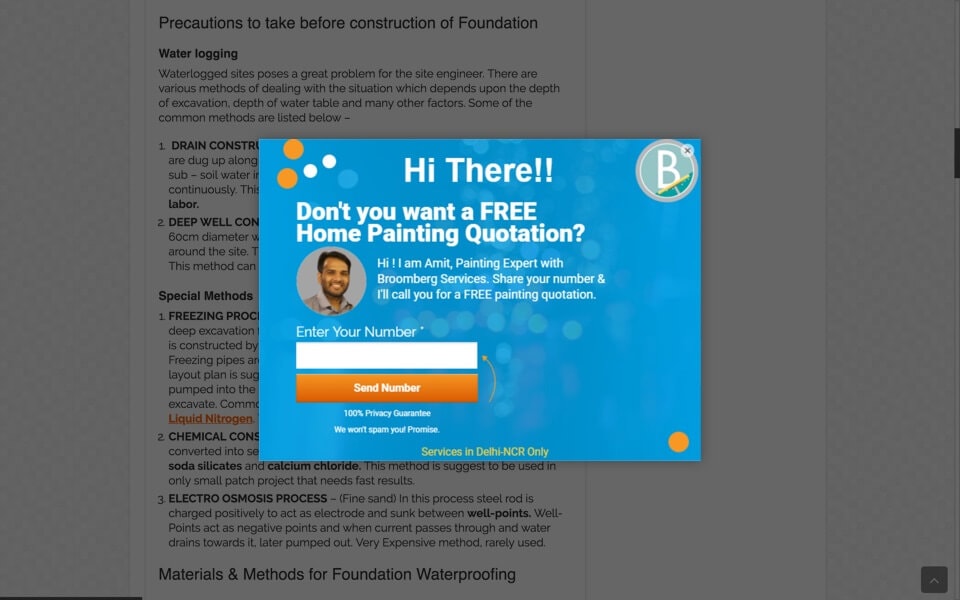 Broomberg found that a single form field for a phone number had worked well in the past, so they stuck with it. To make the offer seem more personal, they added a picture of someone from the sales team.

Because 87% of the blog post’s traffic was from mobile, Broomberg didn’t see much point in using the exit trigger, which is best for desktop traffic. (Smart move.)

They also tested triggering on scroll down, but found that it didn’t really work because HotJar recordings showed that users would scroll up and down the page.

They finally decided to use a time-limit trigger. The average time on page for a blog post was around 120 seconds, so they set the popup to trigger after 100 seconds—not so soon that it would turn someone off from reading the whole blog post, and just late enough to catch someone before they finished reading and left.

The results: a huge increase in leads

There was a 72% increase in total relevant blog leads when Broomberg was using popups in September and October 2017, compared to July and August 2017 (when they weren’t using them).

From October to December 2017, leads from popups were 27% of the total leads in painting. During this time, Unbounce popups helped them get extra leads that were worth 17% of their ad budget.

From October to December 2017, leads from popups were 23% of the total leads in flooring. During this time, Unbounce popups helped them get extra leads that were worth 18% of their ad budget.

So there you have it. An effective way of using popups to get more leads—without paying for more traffic to your site or blog.

Want to see how a popup would look on your site?
Go on, enter your URL and try it out—you don’t even need to sign up!

Being smart with targeting and timing can get you huge results. See how Canvas Factory did it.

3 Unique Ways to Use Landing Pages

How one person got 40% more leads in a year