These days, the word “personalization” is bandied about in marketing circles more than a hacky-sack at Burning Man.

We know that personalizing our marketing campaigns brings us better quality leads, but it’s not always as simple as it seems to get started; before you can personalize emails, content and offers for people, you need to get to know them.

You can’t land qualified leads without getting to know them first.

So when Cookie Jar Marketing, a boutique marketing agency based in Tel Aviv, Israel, was given a contract to promote the growth of Cloudyn, a cloud monitoring and management platform, they knew that step one was to gain a better understanding of the platform’s customers.

Was Yoni’s strategy successful? Well, let’s put it this way:

That offer, sent out in the form of a personalized email, got a 51% open rate and generated $21,000 a year in revenue for the client.

Not too shabby, right? Let’s take a look at how Cookie Jar Marketing accomplished that.

Before they could collect prospect information on a landing page, Yoni needed a piece of content to give away. As an easy win, he decided to compile several valuable blog posts into one super-comprehensive whitepaper.

The whitepaper focused on different cloud vendors and broke down the features and pricing that one could expect from each. With a very competitive pricing and features structure next to that of the competition, this was a great way for Cloudyn to demonstrate their value to people looking for a cloud solution.

Once that was in place, Yoni began promoting the whitepaper. Using several channels at first, he finally settled on LinkedIn, where he was able to very accurately target the people he was trying to reach, zeroing in on specific industries and job titles.

Cookie Jar’s most successful ad on LinkedIn promoting their whitepaper.

Each LinkedIn ad pointed to an Unbounce landing page, where prospects were asked for some of their information in exchange for the whitepaper. And while Yoni was off to a good start, he wanted to be sure that this landing page was performing at its best potential.

The first landing page that Yoni used to promote the whitepaper was very simple. The form for collecting prospects’ information was limited to just four required fields. This first variant converted at 10.7%:

Cloudyn uses salespeople to follow up with qualified leads, and they were asking for more information on the prospects. Yoni explained:

When I talked to the salespeople who followed up with leads, they told me that they did not have enough information to be able to ascertain which leads were ‘hot’ and should be called right away, and which should just go into a lead nurturing program.

Yoni asked them what kind of information they would require to make that an easier proposition, and quickly built another variant of the landing page in Unbounce with the extra fields the sales team asked for, seen below.

The longer form on this Cloudyn whitepaper landing page increased conversion by 10%.

On the one hand, adding more fields to a form can sometimes create friction, making prospects feel as though there are more hoops to jump through.

But on the other hand, gathering extra information can help the sales team become more efficient. For example, the new form contained a field called “Annual cloud spend.” If someone were to select $5 million plus, it is probably worth a salesperson’s time to pick up the phone and call them.

Extra fields be damned, the conversions on the page doubled. And not only were there more leads, but the leads they got were far more valuable.

The sales team suddenly had a lot more information to go on, and the leads were doubling with no increase in ad spend, and no delineation from LinkedIn. And this was just the beginning.

When I asked Yoni why he thought the conversion rate had jumped up that much, he replied:

I think that the fact that we were showing them that we cared about who they were made all the difference.

The more questions asked of the visitor, the more they feel appreciated as a potential customer. It creates the impression that they will be offered a personalized service catered to their unique needs and wants. In turn, each of the leads generated through this landing page ended up being far more qualified, creating greater opportunities for the sales team.

When more information was added into the mix, it wasn’t just the sales team who was better equipped to do their job.

Under the direction of Yoni, the Cookie Jar team was able to use the extra information to personalize emails that went out to prospects who’d filled out the form.

Using Unbounce’s MailChimp integration and field mapping, they tagged all of the fields so when a lead filled out and submitted the form, this information was sent to MailChimp.

Yoni had created an email in MailChimp that would automatically be sent to leads as soon as they filled out the form. And with the information collected on the landing page form, he was able to personalize each email that went out to leads, as you see in the image below:

The personalization of the email didn’t just work, it worked beyond anyone’s expectations. The email got a 51% open rate – and while the clickthrough rate was not amazing, they did get replies to the email that resulted in a demo request rate of an astounding 35%.

The salespeople at Cloudyn and the marketers at Cookie Jar couldn’t have been happier. To date, the whitepaper campaign on its own has resulted in $21,000 worth of business, all from collecting more data and personalizing communication accordingly.

The name of the game for any marketing agency is results. No matter how they’re achieved, the way to keep clients is to make sure that they’re getting a healthy return on their investment. And that’s what Cookie Jar Marketing has done for Cloudyn.

Sometimes you have to go against the grain and so-called “best practices” to achieve those results. Yoni was certain that he’d made the right choice by limiting the number of fields prospects would have to fill out. The reality was that adding more fields and creating more friction resulted in more conversions.

The happy result of those extra conversions is that they had supplied more information, which enabled Yoni to create a personalized email that resulted in demo requests and ultimately, sales.

Cookie Jar Marketing’s clever use of the Unbounce and MailChimp integration is paying dividends for Cloudyn, and it could very well do the same for you. 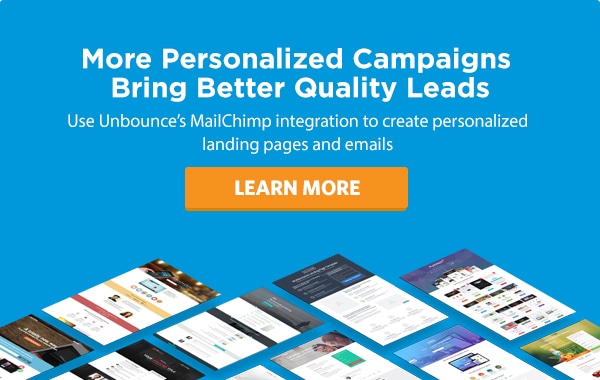