In this episode of Myth Busters… (Image source)

Have you ever come across a common misconception (like an unwarranted health scare) that was able to take hold with a large number of people? I’m sure you have.

In psychology, these sorts of widespread beliefs can roughly be classified as availability cascades, which are the:

…development of certain kinds of collective beliefs. A novel idea or insight, usually one that seems to explain a complex process in a simple or straightforward manner, gains rapid currency in the popular discourse by its very simplicity and by its apparent insightfulness.

Basically, we tend to take mental shortcuts and believe that certain “facts” are true (or are always true) because it’s easier to process things in black and white than the often far more gray reality.

When it comes to conversion rate optimization (CRO), you and I both know that there is no place for this sort of thinking. While there is plenty of room for intuition in CRO, these gut instincts need to be put to the test, and regularly.

After all, as data-driven as CRO is, it is not down to a science to an extent where certain changes will always produce similar results (hell, even actual science has a hard time with replicating results!). As Michael Aagaard from Content Verve would put it:

Since different pages have different goals, one-size fits all strategy is never applicable.

With that in mind, let’s tackle some commonly held conversion principles that you should be testing instead of blindly following.

Can “universally” good conversion tactics like privacy promises and social proof really fall flat under any circumstance? According to this case study published on ContentVerve, even the no-spam guarantee (a staple in CRO for email related forms) needs to be put to the test.


Take a look at the results of a split-test that contained a note promoting a 100% privacy guarantee vs. a form with no such information: 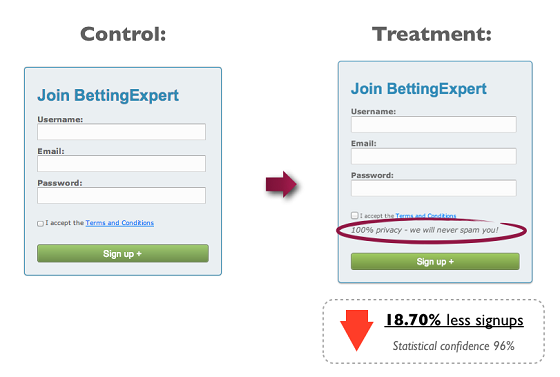 The funny thing, tests like these are where mental shortcuts can start: just because the results drastically changed in this one instance doesn’t mean that “no-spam guarantees” are dead (that’s a linkbait title for your next CRO piece).

Rather, it was perhaps that wording (remember, it’s about optimizing decisions) that threw people off.

In a follow up test, a change in copy showcases that no-spam guarantees are not in fact dead, but alive and kicking (commence with the counter linkbait headlines): 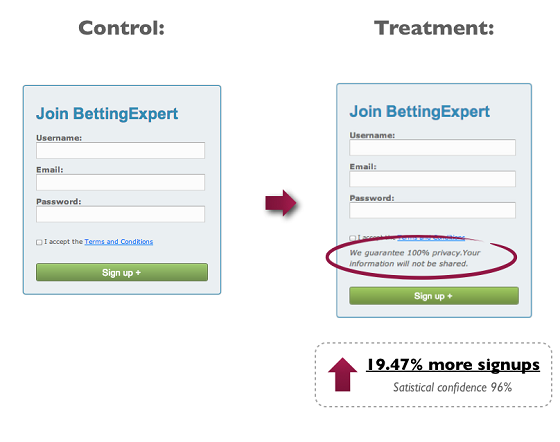 A variety of other tests have shown that the same thing can occur for the highly vaunted tactics of utilizing social proof. Though it’s been pointed about before that having “low” social proof can often result in mistrust from web browsers, what if a company does have a large enough following to warrant social proof?

Consider the results that were found via a split-test on the DIYThemes blog, where the sidebar opt-in was split tested to include a basic form and a form with social proof:

A 3rd variant was tested that removed the “(it’s Free)” text from the form was included as well, and this version also included social proof.

Here were the results:

As you can see, Variation 2 (the version without social proof) performed better and actually improved over time, versus the other forms which (marginally) worsened over time and didn’t perform as well as the more basic opt-in form.

Another apparently established rule in UX is the three-click rule, which states that users will generally give up on something if it takes longer than three clicks.

Not only has that rule been debunked time and time again:

…but this persistent belief that you should always reduce the number of clicks to a minimum is something that doesn’t always stand up to scrutinizing via testing.

In a case study published by a Visual Website Optimizer customer, eCommerce tool Vendido showcased how a second page actually helped increase their conversions by 61%: 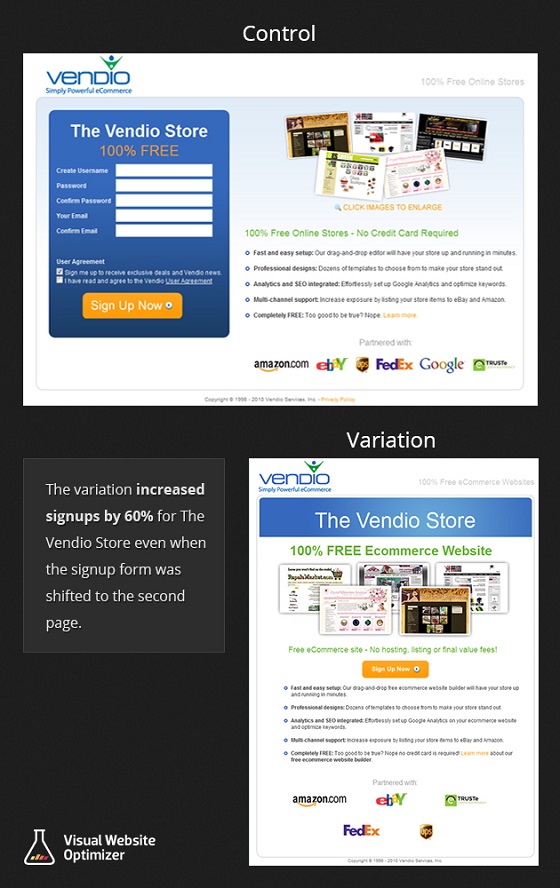 Moving from a single page to a two-click process should by all rights be a conversion killer, but it wasn’t the case, possibly due to the “cramming” of information on the solo page resulting in a severe case of analysis paralysis for users.

Para Chopras’ explanation of why the company originally went with this page is a perfect summation of how ‘best practices’ can go awry:

Note that it uses the so-called “best-practice” of embedding the signup form in the landing page itself. They had long been using the layout of the original page because as a best practice they presumed that reducing the number of clicks for a registration increased conversion rate… best practices are NOT always true.

Should I always start my free trial with your software? Or is asking me directly (‘start your free trial”) more effective?

The un-sexy answer, as analyzed in another fantastic overview from ContentVerve, is that it depends. Consider the following test conducted on Unbounce itself: 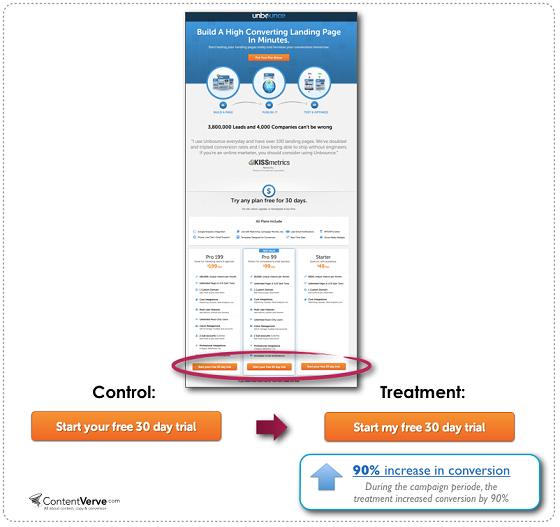 Ah, so I should be creating buttons that invoke a call to “start my free trial”, right?

Nope. Check out this test published in the same article that changed an account creation form from invoking the 1st person (my account) to an extended, far more neutral command. This small copywriting change had some drastic results: 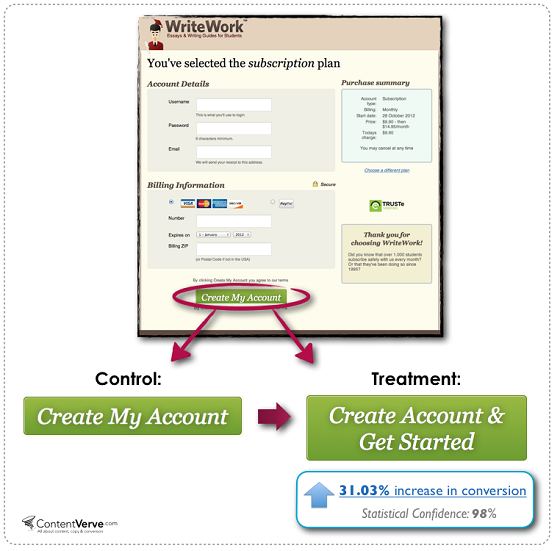 A longer, more direct, and less personalized button performed quite a bit better than the quicker copy focusing on the self.

So instead of blindly adding “create my [blank]” to every section on your site, test a variety of different options to ensure you get the most ‘bang for your button.’

Dropdowns are one of those things most designers expect an eCommerce site to have. This is in spite of the evidence that many users don’t like dropdowns and find them confusing.

In an outstanding analysis published on Visual Website Optimizer, the health site BodyEcology completely dropped their drop-down options in favor of a category page with brief product summaries:

Smriti Chawla, VSO’s resident content marketer, describes the big impact on the company’s bottom line due to these changes:

Among the multiple of navigation mistakes you can make, this was one that you probably didn’t expect, but should pay close attention to, especially if you operate an online store with a variety of products.

It’s a known fact that you don’t have much time to capture attention with your headline, and it’s also been shown that a large majority of users prefer “straight to the point” headlines over anything subtle or creative.

These proven practices have generally served marketers and web designers well, but as is the running theme in this article, they shouldn’t be accepted as being universally effective when it comes to increasing conversions.

As Michael again shows us, sometimes excess copy can destroy conversions (as one would expect). In this particular instance, the tests were done on a sign-up form: 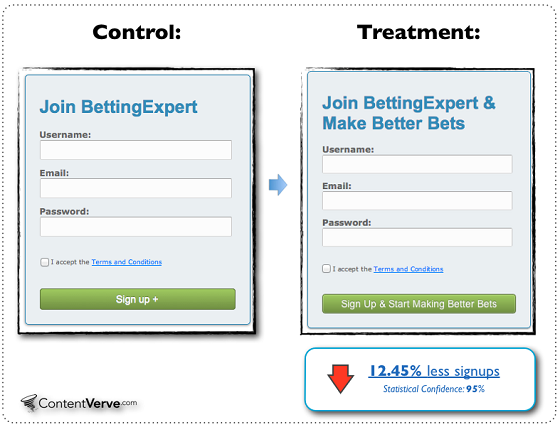 Vanilla results, right? You would assume that brevity is king in nearly all aspects of increasing conversion rates.

However, the opposite is true in many other cases.

Take, for instance, this case study on Movexa, where a longer headline (in this instance, on a sales page) helped add clarity and ended up improving sales by 89%:

Again, we come back to the point that we aren’t simply optimizing web pages, we are optimizing a potential customer’s decision making process, and if that means adding clarity by adding a few extra words, then so be it.

This debate over brevity obviously carries over into other realms as well. Consider this test on adding more forms that showcased how extra forms did not decrease conversions and actually resulted in more quality responses: 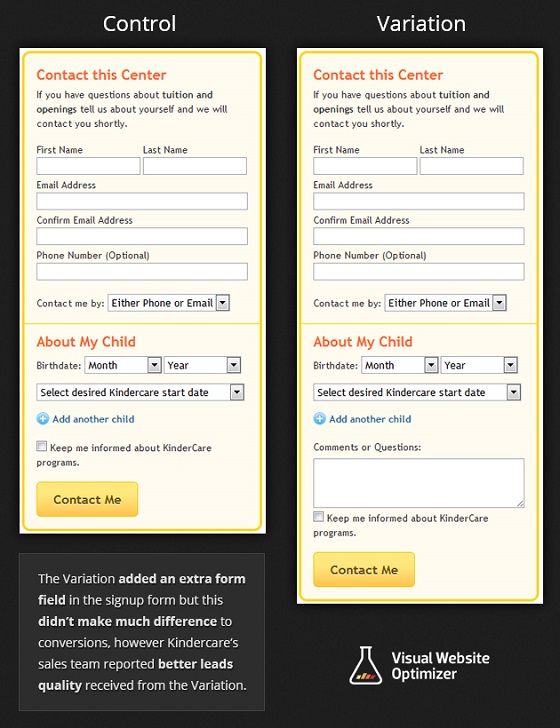 Last but not least, you have long copy pages vs. short copy, which again produce varying results depending on the website, product being sold, and intended audience.

Consider this test conducted by Neil Patel on homepage copy length for his consulting services. Patel pitted a page with 1292 words against a page with 488 words and found that the longer page converted 7.6 percent better than the above the fold variety:

And it didn’t just end there, the leads from the long form version of the page were higher in quality than the leads that came from the new variation.

No surprise that brevity is just like ever other “proven principle” in CRO: it may work extremely well in some instances, but it’s never universal, and should always be tested.

Here are two things I want you to do next: