Here’s how one agency took their client’s content strategy to new heights with a little help from lead gen landing pages. Image source.

How does a blog post ultimately translate into a new customer? That’s the question content marketers should be gut-checking themselves with every day, and that Effin Amazing was both uniquely qualified and an unlikely candidate to answer.

Effin Amazing is a boutique digital marketing agency based in Orlando, Florida. Co-founded by Dan McGaw, the former marketing head at KISSmetrics, they pride themselves on a “relentless focus on measurement, analytics and testing.”

On the surface, that data-driven approach doesn’t quite square with the notoriously soft science of content marketing. In fact, some might place analytics and content on opposite side of the marketing spectrum.

But as we’ve explored before, this is starting to change. And marketing agencies like Effin Amazing are leading the way.

Over the past few months, Effin Amazing planned and executed an ambitious content strategy for one of its clients aimed at filling their marketing funnel with qualified leads and nurturing those leads into customers. So far they have been able to:

I’m going to take you through this campaign step-by-step and, in the process, teach you how you can run one just like it.

It wasn’t long ago that the Apple App Store (and eventually Google’s Android market, Google Play) was the wild west of the ecommerce world. Savvy developers could launch successful apps easily, without the need to get a pesky marketer involved. If you were an entrepreneur who lacked coding skills, you could hire one of these developers relatively cheaply and watch your app rise to the top of the charts.

Then, in 2014, an intoxicatingly simple game out of Vietnam, starring a small flapping yellow bird, became an overnight sensation, reportedly earning its developers $50k a day before they suddenly pulled it off the market. What followed was a deluge of copycat games with names like Flappy Plane, Flappy Bee and Splashy Fish.

These days the mobile app market is a far more crowded space, with more than 60 thousand new apps and 12 thousand new games published every month.

The Flappy Bird effect also meant that Chupa Mobile, which launched in 2011 as a marketplace for buying and selling source code, needed to distinguish itself from the shady copycats that Apple and Google had begun to crack down on. In addition to providing templates for developers to easily build mobile apps and games, they also matched up professional app designers and developers with entrepreneurs looking to break into the space.

“After Flappy Bird, everyone was talking about ‘cloning,’” explains Paolo. “We do not suggest to our customers to just pick up a template, make a few changes and republish as is. We’re trying to educate customers to use templates as a solid base to make something better.”

Educating the expanding market was crucial for Chupa, and this meant creating credible content that informed both potential developers and entrepreneurs on how to navigate this lucrative but increasingly competitive landscape.

That’s when Paolo got in touch with Dan McGaw, who he’d met years earlier and had recently left KISSmetrics to start Effin Amazing. Although Chupa is based in Italy, more than half of its customers are in the U.S., so hiring an American agency was key.

Effin Amazing’s mission would be to help Chupa refine their messaging and create a comprehensive content strategy aimed at generating new leads and eventually nurturing them into customers.

But first, they needed to figure out exactly who they were marketing to.

Chupa has two core segments of customers. The first is mobile app developers, who they had been targeting from the beginning and were already flocking to their marketplace.

The second is what they called “appreneurs” – entrepreneurs and companies seeking an easy, affordable way to tap into the piping hot industry and rise above the noise. They realized they needed to start creating content catered to their needs.

Under the guidance of the Effin Amazing team, led by Director of Marketing Daniel Sosa, Chupa rejigged their editorial calendar and began publishing blog posts with titles like “The 10 Craziest (But Real) Motivations to Launch an App,” “How to Build a Mobile App With No Programming Experience,” and “Android or iOs App: What to Build First?”

“The main strategies involved doing keyword and content research to build a very desirable content calendar. We only wanted to be pumping out content that is of very high demand. We quickly learned that anything that involves lowering the barriers to get started for “appreneurs” and anything about app monetization does extremely well.

Also ASO [app store optimization] is a hot topic. From there it was all about a defined distribution plan that is executed with each release – this involves structured social media along with channels such as Growth Hackers, Quora and many more.”

With their new blogging strategy, Daniel says they were able to grow Chupa’s blog traffic by 35% in less than two months. Which is amazing.

But you know what would be effin amazing? Finding a way to translate that qualified traffic into qualified leads…

Now that more “appreneurs” were reading the Chupa blog, the Effin Amazing team needed a conversion carrot – an incentive for them to fork over their emails so that they could be nurtured further down their marketing funnel.

The solution was to create an ebook about what the agency identified as one of the most popular topics for this segment, App Store Optimization (or ASO). Daniel worked with Chupa’s content strategist, Melissa Varela, to write the guide while Effin Amazing’s designer, Mark Bunker, whipped up a simple landing page for it using one of Unbounce’s lead gen landing page templates.

They included a call to action leading to the landing page at the bottom of relevant blog posts and soon, the ebook was generating dozens of leads a day, with the landing page converting at 44% right off the bat.

The blog CTA that led to the lead gen landing page

“It started converting at that level overnight,” says Mark, when asked what they did to optimize the page. “I took the template and did very little to be honest!”

Bolstered by the success of that first guide, they decided to create a second one aimed at developers. But this time, Daniel and Mark set up an Unbounce account for Chupa so that content strategist Melissa could build the landing page herself. All it took was a two-minute screencast video to teach her to create the new page herself using the same template they’d used for the first guide.

The Chupa landing page in the Unbounce app. Click for larger image.

Mark, who is an Effin Amazing co-founder as well as a designer, admits the agency could have continued building Chupa’s landing pages for them and bundling it into their fees, but says that wouldn’t be aligned with their mission to help their clients achieve long-term sustainable growth.

“I’m sure we can make a ton of money just building landing pages for clients and charging a lot,” says Mark. “But we don’t want to do it.”

From Chupa’s perspective, empowering Melissa to build landing pages for content marketing campaigns herself frees up Chupa’s own developers to focus on other projects, like developing mobile app templates for customers.

Before using Unbounce, Chupa would code their landing pages on WordPress, which often took a full week of work, according to Paolo.

“If you needed to make changes you’d have to interrupt the IT team, interrupting other milestones and causing delays,” Paulo says. “It could have saved me a lot of headache and time if we used it before.”

PRO TIP: With Unbounce’s new WordPress integration, you can publish a landing page built in Unbounce onto your existing WordPress domain with the click of a button. Find out more here.

Empowering their client to build landing pages on their own had another benefit for Daniel and the Effin Amazing team: It allowed them to move on to the next step in the campaign.

Have leads, will nurture

Okay, so let’s say I’m an eager “appreneur” who reads Chupa’s blog post, clicks through to the landing page and downloads the guide. Here’s what happens next:

A map of the lead nurturing campaign, courtesy of Effin Amazing. Click for larger image.

Once someone enters their email into the form on the landing page and downloads the guide, they’re placed on a list in MailChimp, which integrates with Unbounce. Over the course of the next few weeks they’re sent a drip campaign, which begins with an introduction to the Chupa platform and how it works and concludes with an inspiring customer “success story.”

At that point, leads are encouraged to register for a Chupa account, which is free. If they do, they’re onboarded through a more product-focused email flow to hopefully become a paying customer. If not, they’re placed on the blog RSS list, since they’ve demonstrated interested in Chupa content (and might still convert down the line).

This drip campaign was launched a couple weeks ago and so the data is still trickling in. So far, Daniel says they can attribute thousands of dollars in sales directly to the guides, in addition to the hundreds of leads they’ve generated – and continue to generate.

It’s easy to dismiss the value of a single blog post or a term as broad and ill-defined as “content strategy.” But as this story shows, every piece of that strategy – from a fun, brand awareness-building blog post, to an educational ebook, to the landing pages and marketing emails that do the content’s dirty work — plays a key role in the ultimate conversion.

By empowering their client with both the tactics and the tools to carry them out on their own, Effin Amazing created not just a successful campaign but a whole new marketing strategy that can transform their business. Indeed, 2.5% of apps published in the App Store already come from Chupa templates, according to Paulo, so the opportunity is enormous.

In the end, combining content creation with lead gen landing pages and email marketing automation allowed a growing agency to expand its service offering, while providing extra value to its client at no additional cost.

“You can feed a man a fish or teach him for a lifetime… whatever that expression is that I just totally butchered!” Mark says, laughing.

I know what he meant. And I’m pretty sure his well-fed client does too. 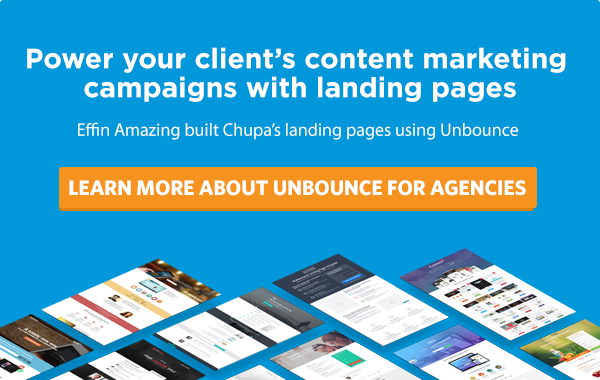