Is it possible for content marketing to pick up any more hype in the online business world?

(Side note: I think we need a content marketing version of What the !@#$ is My Social Media Strategy? due to all of the buzzwords getting thrown around these days)

The problem with the discussion around “creating awesome content” is that most people treat the process as a gift rather than a sincere strategy.

News flash: Telling someone to “create awesome content” does not constitute as advice, and implying that audience building relies entirely on your ability to write well is a falsehood.

Let’s step away from the “hoo rah” surrounding content marketing, and discuss some legitimate strategies for creating popular content.

Right now, we’re going to look at some academic research from Wharton Business School on what makes some of the most popular content on the web (controversial content) go viral, and I’ll break down 3 proven templates that you can use to get started right away.

In a Wharton Business School study entitled, When, Why, and How Controversy Causes Conversation, researchers Jonah Berger and Zoey Chen make some surprising conclusions about what sort of “controversial content” gets shared the most.

According to their findings…

Hmmm… the opposite of what you might initially expect.

Though it does make sense: After all, bringing up topics that are highly controversial (politics, war, religion, tragedies) can be very risky in a huge majority of social situations.

They make even worse topics for a business blog… so we can successfully rule out highly controversial topics as sources for our content.

Since that is the case, what exactly do they mean by “low levels” of controversy?

One of the lead researchers of the study mentioned above, Jonah Berger, is an expert on virility, and for the promotion of his new book Contagious, Jonah sat down with many marketing publications to discuss what makes things catch on. In a recent podcast, Jonah discusses the “inner remarkability” of black toilet paper, and the conversation leads to this highly popular image on Facebook: 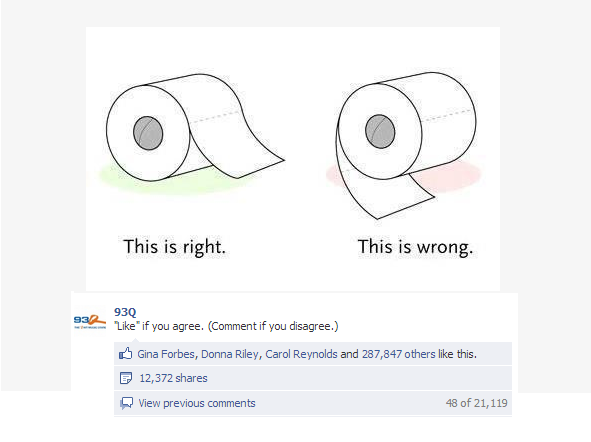 To me, this image should be burned into the minds of content marketer’s everywhere, because it is the perfect bite-sized example of what Jonah means when he refers to content of “low” controversy.

It’s been so stuck in my head that I’ve ended up re-dubbing my use of this tactic as the “Toilet Paper Strategy”… as it seems that people everywhere are taking sides on the hotly debated topic of toilet paper orientation (yes, that is a 6000 word Wikipedia article on the subject) and it is a controversial argument that rages on throughout the web.

Just check out this gem:

You read that correctly: a columnist with many decades of published work is admitting that talking about toilet paper orientation was her most controversial piece ever… seriously, what is wrong with us?

More importantly, this leads me to the biggest takeaway from the Wharton paper…

Successful controversial content on business blogs should stir up a debate that people feel strongly about, but that won’t result in genuinely hurting people’s feelings.

Essentially, a debate that will have people tripping over themselves to leave their opinion and share it, but one that avoids offensive topics and instead promotes controversy on topics that the general public will not be genuinely upset with.

The thing is, the controversy DOES NOT have to be stupid or silly like arguing over toilet paper, I use that example to simply remind you to stay away from “true” controversies that take things too far.

Now, let’s look at some templates you can use that fulfill all of the needed requirements of the “Toilet Paper Strategy,” but also take things to the next level!

Above you see an article on why Steve Job’s stance on customers “not knowing what they want” may be bad advice, and another article (by Sonia Simone) on why self-hosted publishing is the only way to go.

What’s the similarity between these two articles?

Both “ride the coattails” of another very popular topic.

For instance, in my Steve Jobs post, I cite articles from the Harvard Business Review and quotes from VPs of marketing for major brands… yet the title (and the central focus) is aimed at Steve Job’s opinion.

Why? Because he is a popular subject, and people are attracted towards articles about his viewpoints.

If I had simply left it to, “Hey, customer feedback is sometimes essential, but sheltered innovation is also useful,” nobody would care.

But since I centered that topic around Jobs and his famous quote on the matter, the article blew up… 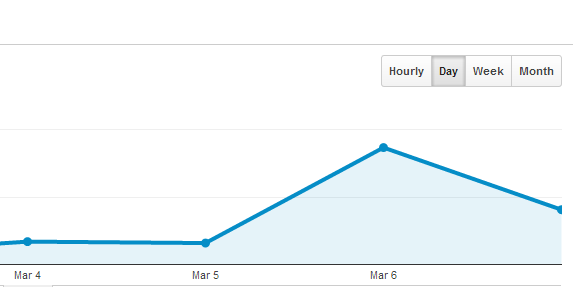 The next example, published on Copyblogger, takes a stab at “digital sharecropping,” or putting all of your work onto a medium that someone else owns.

This call for self-hosted content was boosted by the fact that Sonia took shots at Facebook, and given the timing, it was a smart move because she stirred up a far more heated debate than if she had simply said, “Don’t host your content on someone else’s site.”

She also mixed in a very memorable metaphor with the sharecropping aspect, turning a post with some great ideas into a piece of viral content that had everyone talking.

You’ve probably noticed I’ve been sticking with marketing/business examples, because that’s what we’re all about on the Unbounce blog, but I had to keep you on your toes with the second example.

Above I list a great example of KISSmetrics putting email marketing vs. social media marketing, and stirring up a debate on which one is better.

Below we get into the interesting stuff… I happen to think the OKCupid blog is one of the greatest examples of content marketing ever, and it is because of posts like this.

They dove head first into a topic that borders on “too far,” protected themselves from the argument by using data (more on that later), and caused an absolute uproar with a “This vs. That” style post.

Check out the results…

However, it also relies on the classic formula of stirring up controversy: direct comparisons between Something vs. Something else.

If you can find two camps that are very different (or always taking jabs at each other), spark a debate and plant your flag, it’ll be sure to drum up attention.

Template # 3 — Being the Messenger

Above we have Derek Halpern from SocialTriggers taking pot shots at the “content is king” myth, and Peep Laja from ConversionXL telling you that image sliders just plain suck.

What’s the little something extra they have going on in these examples?

It’s that they are citing research and “presenting” the evidence, rather than making an argument on anecdotal evidence.

Perhaps you’ve heard of the phrase…

As it turns out, it’s a great way to create content too.

If you are simply the messenger for convincing data, you are deflecting controversy away from yourself (directly) and instead take the role of presenter – still picking a side, but doing so by allying yourself with relevant data.

You can dip into some great controversial topics with this strategy (as OKCupid did), as long as your data is solid enough to give you “immunity” to the countless people who will likely try to argue.

I actually threw in a small bit of this in my “Science of Productivity” post, calling out multitaskers as being full of crap… the thing is, although I was saying it, the data was making my point for me, so it was hard to argue (people still did, it’s the internet).

Make people argue with numbers or the research rather than arguing with you, and you can address some controversial topics that may have been out of bounds before.

Now I need to hear your opinion!

Thank you for reading, I’ll see you in the comments!