Stats make you smarter. And if you tweet them, you get to look smart, too. Image credit.

Are you a mobile marketer? If you’re a digital marketer, then the answer should be a resounding “yes” – increasingly, your audience is interacting with your campaigns from a handheld device.

As the growth of this segment continues, mobile marketing statistics help us understand what we need to do to meet the needs of customers.

To that end, we’ve compiled a ton of data that will help you understand how people are using mobile and how you can best reach them.

Read on to learn about what’s happening in the world of mobile marketing. Then pick a tweet or two or three and tweet away, smartypants!

The massive growth of mobile

Ten years ago there were 26 million mobile internet users across the globe. Fast forward to 2015, and we’re looking at 2,781 million people accessing the internet from a smartphone.

Plus, mobile internet is getting faster. Whereas slow speeds have limited internet access in the past, 39% of all mobile connections are now considered to be “broadband,” with 3G, 4G and LTE networks becoming the norm.

Advertisers are starting to sit up and take notice. Mobile ad spend is expected to increase from $42.63 million in 2014 to around $69 million in 2015, and is showing no sign of stopping. By 2016, the amount spent on mobile ads could be more than $100 billion.

People love their phones — a lot

An IDC Research report (PDF) states that 80% of people check their phones within 15 minutes of waking up.

And we take our phones everywhere. According to research done by 11Mark, 75% of Americans have used their phones in the bathroom. The other 25% are obviously just not willing to admit it.

75% of Americans use their smartphones while in the bathroom.

I would be remiss were I not to mention that the bathroom is where the conversion magic happens.

According to the same 11Mark study, iPhone users are 12% more likely to make a purchase while sitting on the porcelain throne.

iPhone users are 12% more likely to make a purchase while sitting on the porcelain throne.

I’m not sure who the genius marketer will be who will manage to take advantage of this statistic, but figuring out how to make the most of that information would be the marketing coup of the century. Not figuring it out would be like flushing money down the toilet.

Mobile is a research tool

That 80% of local searches convert to a sale should be enough to make marketers sit up and pay attention.

80% of local searches from mobile convert to a sale.

That being the case, you definitely want to make sure you’re appearing front and center in  search results – especially since people use search engines as the starting point for their mobile research 48% of the time, according to Google’s Mobile Path to Purchase ebook:

If a visitor gets to a landing page or website that isn’t optimized for mobile, 40% of the time they’ll just look for another result.

If your site isn’t optimized for mobile, it will be abandoned by 40% of mobile visitors.

Those of you who take the time to become responsive to the needs of mobile users are going to end up with a nice, big piece of the search and conversion pie; this study by iAcquire states that 70% of mobile searches lead to action on websites within one hour.

70% of searches on a smartphone will lead to action on a website within one hour.

Mobile is for email lovers

Depending on the source, anywhere from 50-66% of emails are now opened on a mobile device. That’s more than what’s opened on desktops.

Just how often are people checking their smartphones for email? According to one source, up to 91% of people are checking it daily.

91% of consumers check their email at least once a day on their smartphone.

What’s more, nearly a quarter of marketing campaign emails that are first opened on a mobile device are later opened a second time. 70% of the time, this happens on the same device, and 30% of the time, it happens on a different one.

With so many people turning to their phones to check email, it’s now more important than ever to make sure that any email being sent as part of a marketing campaign is optimized for mobile.

The rise of mobile video

With video accounting for 55% of mobile data usage, it’s time for marketers to step up their video game. 50 million people in the US watch video on their phones on a regular basis, with 15% of all video hours being watched on either a tablet or a smartphone.

Video accounts for 55% of mobile data usage – that’s 50 million people watching in the US.

And another stat from Invodo should make marketers excited about getting out their Handycams:

All right marketers. Video for mobile. Get on it.

Mobile isn’t something you’ll want to start adopting some time down the road eventually.

As these stats have hopefully shown you, the opportunity to reach customers through mobile is massive.

As people get curious about products, they search for them with their smartphone. The marketer who manages to put the product or service in front of the searcher in a way that reaches them on their smartphone will always have the upper hand.

So go – optimize everything you do for mobile. And while you’re at it, share some of those tweets to show your audience how savvy you are.

​Thanks for downloading the checklist.
Now go put it to good use!

We put together a 12-Point Mobile Landing Page Checklist to keep you on track. 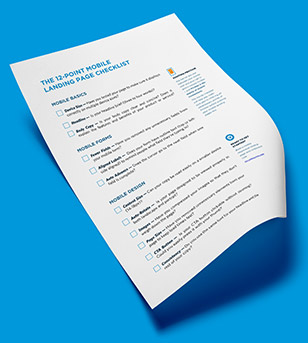