Autoplay video seems to be growing in popularity, despite unanimously being seen as a real pain in the butt. We’ve all scrambled red-faced for the mute button at one time or another, and we know first-hand that it flat out annoying – and even embarrassing.

This guy’s not a fan of your autoplay videos. Image source.

But does that embarrassment translate to a dip in conversions on your landing page?

Spoiler: the first five seconds of your video are more important than you may think.

What can video do that text can’t?

Let’s start at the beginning: why video?

We all know that many landing page visitors are skimmers, glancing over text and images to get a quick sense of your unique value proposition. Why would we ask our users to spend an additional minute or two watching a video?

Videos are the most powerful means of communication.

As he explained, when your users watch a video, they get so much more information than they would by simply reading text. They get:

Video acts as a stand-in for a real salesperson, filling the void created in the online world by disconnecting from a physical store. This results in sales conversion increases.

Adding a video to your landing page is like adding a salesperson.

Take a look at this explainer video from Tapinfluence. It has a friendly, personable salesperson acting as your guide, along with a walkthrough that’ll give you a visual understanding of the product:

That’s what a landing page video can do that text can’t. Are you ready to learn more?

What is the ideal video length?

She cited a statistic from The New York Times/Visible Measures that indicated 19.4 percent of users stop watching video after the first 10 seconds, and 44 percent stop watching after 60 seconds.

This basically means that it’s crucial to pack the first few seconds of the video with your critical messaging.

“The first five seconds are crucial enough for people to decide if they want to proceed further or not,” Garg went on to explain. “If you make the first five seconds of your video interesting, it’s very likely that most people will watch your video all the way to the end and take further action, which you want them to do through your call to action.”

Here’s an example of a landing page video that Broadcast2Video created for LockerGenie. Pay close attention to the first five seconds:

Not only do they hook you by describing a relatable pain point in great detail, but the five-second mark ends right as the cartoon man is running across the screen with an armful of laundry.

Broadcast2Video and LockerGenie used the first five seconds of this video to relate to prospects and then build investment in the story to keep ‘em watching.

Who among us hasn’t lunged for our headphone jack or mute button after opening a page that contains an unexpected autoplay video? Well, it turns out that neither of our experts recommend autoplay video as a way to drive conversion. Nochimowski explained:

This can be perceived as aggressive to the user.

Garg added, “I believe that anything which is pushed on users irritates them and make them suspicious about your product or service.”

What’s the best solution? Nochimowski suggests that “the best is to have a prominent play button displayed on the landing pages (above the fold, for example).”

Garg agrees, with a caveat:

Ultimately, the only way to decide if your video should play automatically is to A/B test two versions of your video landing page; one with an auto-play video and another that gives users control over landing page elements like video.

Conversion optimization blog ConversionXL suggests that Facebook and Twitter’s recent adoption of autoplay video might prime your users to be more accepting of autoplay.

Video production company Basetwo Media reminds us that Facebook and Twitter often use silent autoplay video (that is, the user sees the video play automatically but has to manually activate the sound), which is one more option for you to consider — and test!

Here’s one more video data point for you: Treepodia’s research states that adding a play icon to your video boosts video views by up to 100 percent. So if you decide against autoplay, make sure your prospects know they’re supposed to press play.

Is it better to use animation or live action?

“In our experience, when used on landing pages, animated videos convert significantly higher than live-action videos,” Garg told me. “Animation is simply more conducive to helping your target audience understand your brand, product, or idea, which is why explainer videos are so successful.”

What can animation do that live action can’t? Garg explained that animation helps you communicate ideas with “simplicity and the right emotions.” He also notes that animation is often best for introducing users to a new, abstract topic.

As with autoplay video, you’ll never know until you test it.

We create animated videos but we also give our clients the option to upload full-production videos and let them be A/B tested one against the other. Results vary; sometimes the smallest detail can make the difference.

“When buying products, users want information about the product and how to use it. I believe it needs to be the most practical and useful as possible,” Nochimowski stated.

A visual representation of your offer that demonstrates how your product or service actually works so your prospects can picture themselves using it.

Here’s a video from Screenr that shows the hero shot in action:

After watching that video, you can picture yourself using Screenr, right? You can picture exactly how using it will help solve your screencasting woes. That’s why the hero shot works.

As Unbounce’s Oli Gardner put it:

Your hero shot should sell the hell out of your product. Make it clear & dominant.

If you aren’t yet sold on the idea of adding landing page video to your website, here’s one more fact for you, from Treepodia: according to an Adobe Digital Report, 61 percent of businesses indicate online video as their top sales converter.

Are you ready to start thinking about adding video to your landing pages? If not, it’s time to read this article again — or maybe we should have made it into a 30-second video! 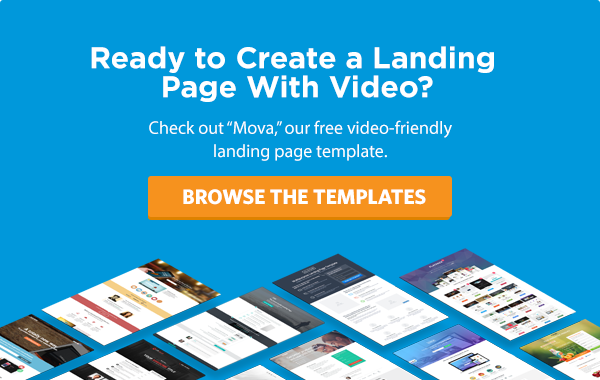 Nicole Dieker is a freelance writer and copywriter. She writes the "How A Freelance Writer Makes A Living" column for The Billfold, and her work has also appeared in The Toast, Yearbook Office, Boing Boing, The Penny Hoarder, and The Freelancer by Contently. Follow her on Twitter @HelloTheFuture.
» More blog posts by Nicole Dieker